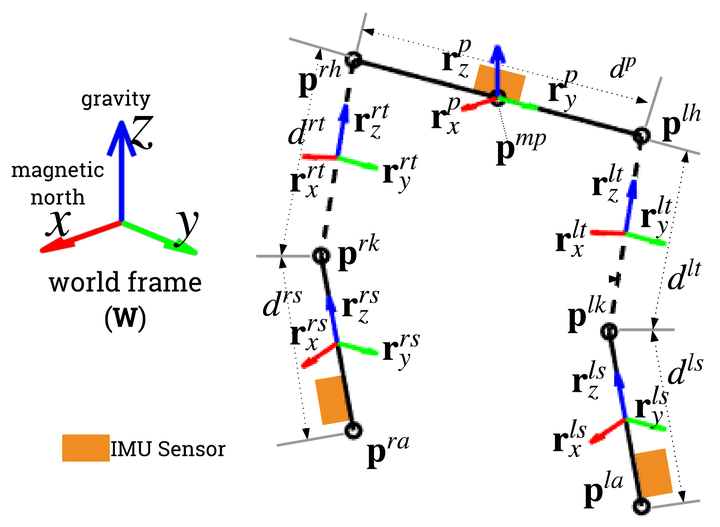 Human pose estimation involves tracking the position and orientation (pose) of body segments, and estimating joint angles. It finds application in robotics, virtual reality, animation, and healthcare. Recent miniaturisation of inertial measurements units (IMUs) has paved the path towards inertial motion capture systems (IMCs) suitable for use in unstructured environments. However, commercial IMCs attach one sensor per body segment which can be considered too cumbersome for daily use. A reduced-sensor-count (RSC) configuration, where IMUs are placed on a subset of body segments, can improve user comfort while also reducing setup time and system cost. Developing a comfortable IMC for routine use can facilitate interactive rehabilitation/performance improvement, and the study of movement disorder progression to enable predictive diagnostics.

The algorithm was evaluated on nine healthy subjects who were asked to walk freely, jog, and jump within a $4 \times 4 m^2$ room. The mean position root-mean-square error relative to the mid-pelvis origin was $ 5.75 \pm 1.4$ cm, while the sagittal knee and hip joint angle correlation coefficients were $0.88 \pm 0.1$ and $0.77 \pm 0.1$ indicating promising performance for joint kinematics in the sagittal plane. The algorithm can compute gait parameters in real-time and can be used to inform gait assistive devices.